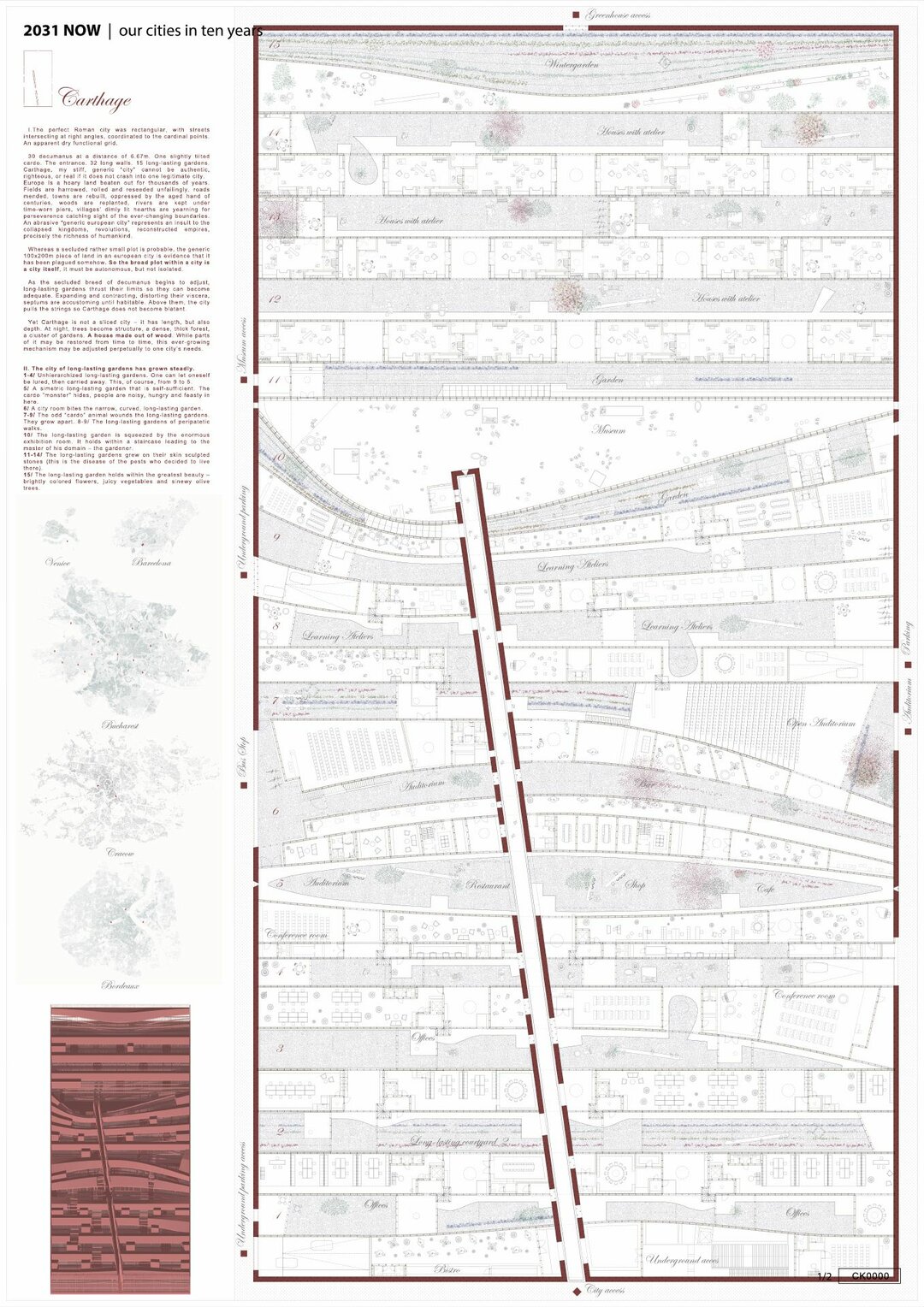 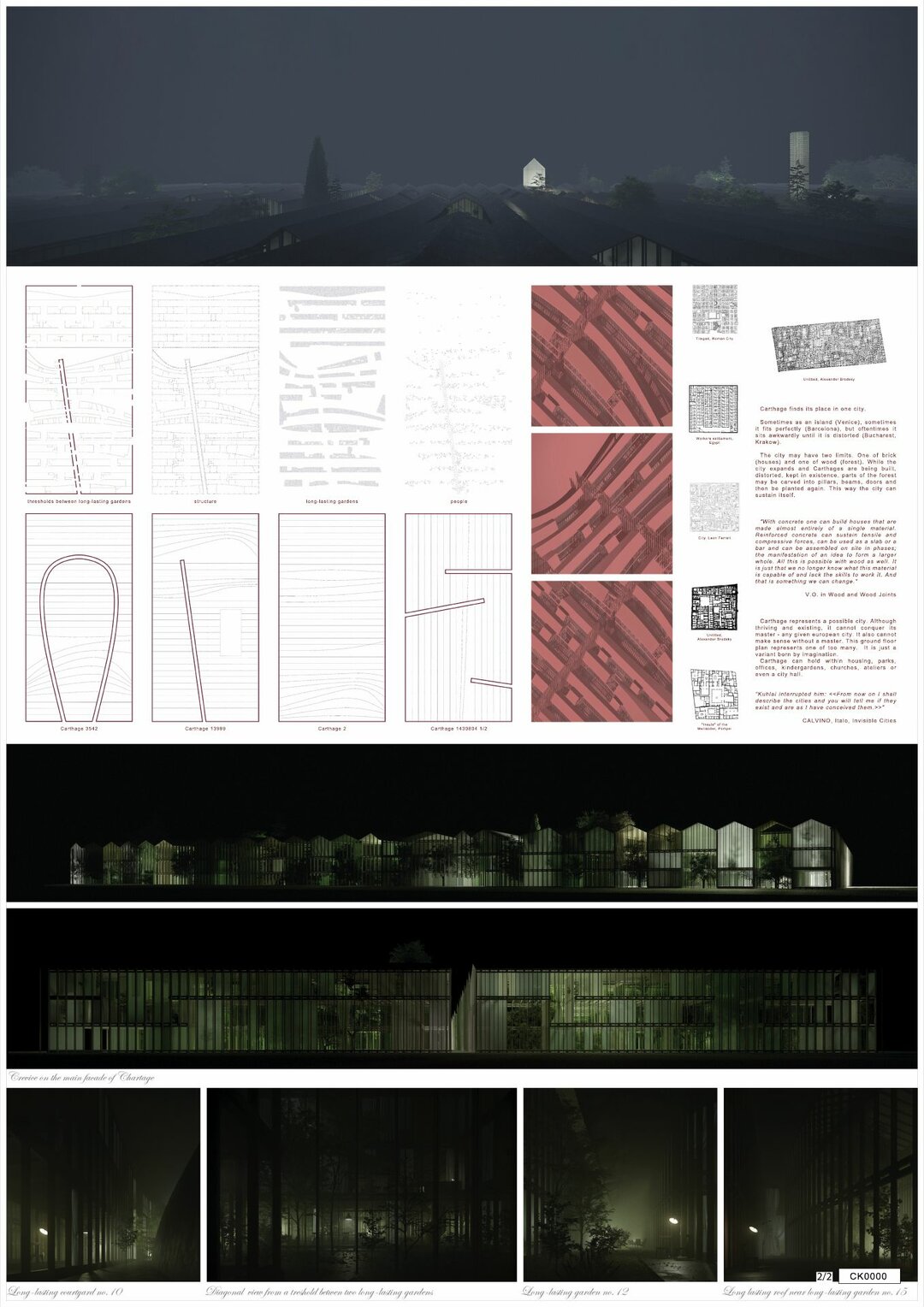 I. The perfect Roman city was rectangular, with streets intersecting at right angles, coordinated to the cardinal points. An apparent dry functional grid.

30 decumanus at a distance of 6.67m. One slightly tilted cardo. The entrance. 32 long walls. 15 long-lasting gardens. Carthage, my stiff, generic “city” cannot be authentic, righteous, or real if it does not crash into one legitimate city.

Europe is a hoary land beaten out for thousands of years. Fields are harrowed, rolled and reseeded unfailingly, roads mended, towns are rebuilt, oppressed by the aged hand of centuries, woods are replanted, rivers are kept under time-worn piers, villages’ dimly lit hearths are yearning for perseverence catching sight of the ever-changing boundaries. An abrasive “generic european city” represents an insult to the collapsed kingdoms, revolutions, reconstructed empires, precisely the richness of humankind.

Whereas a secluded rather small plot is probable, the generic 100x200m piece of land in an european city is evidence that it has been plagued somehow. So the broad plot within a city is a city itself, it must be autonomous, but not isolated.

As the secluded breed of decumanus begins to adjust, long-lasting gardens thrust their limits so they can become adequate. Expanding and contracting, distorting their viscera, septums are accustoming until habitable. Above them, the city pulls the strings so Carthage does not become blatant.

Yet Carthage is not a sliced city – it has length, but also depth. At night, trees become structure, a dense, thick forest, a cluster of gardens. A house made out of wood. While parts of it may be restored from time to time, this ever-growing mechanism may be adjusted perpetually to one city’s needs.

II. The city of long-lasting gardens has grown steadly.

1-4/ Unhierarchized long-lasting gardens. One can let oneself be lured, then carried away. This, of course, from 9 to 5.

5/ A simetric long-lasting garden that is self-sufficient. The cardo “monster” hides, people are noisy, hungry and feasty in here.

10/ The long-lasting garden is squeezed by the enormous exhibition room. It holds within a staircase leading to the master of his domain – the gardener.

11-14/ The long-lasting gardens grew on their skin sculpted stones (this is the disease of the pests who decided to live there). 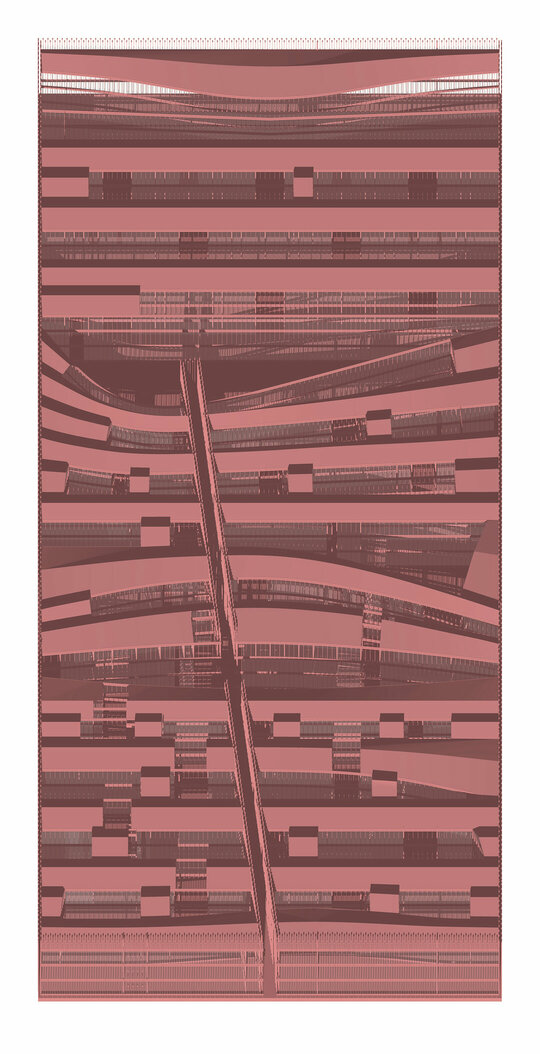 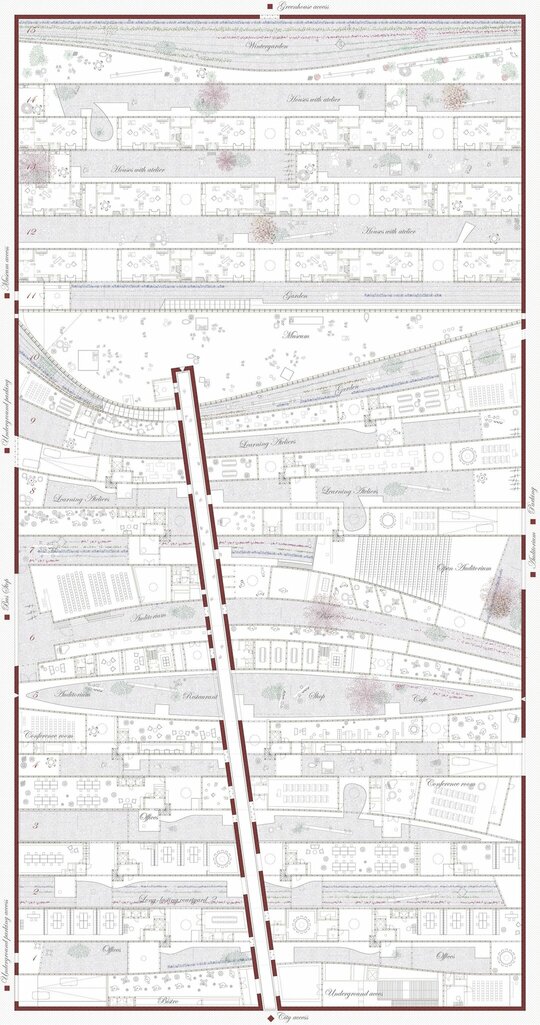 the city within a city 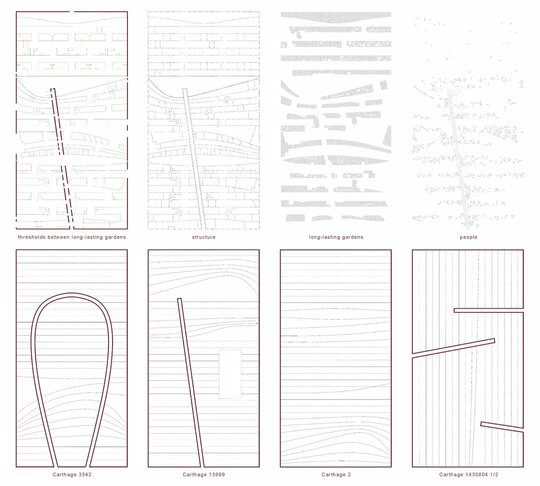 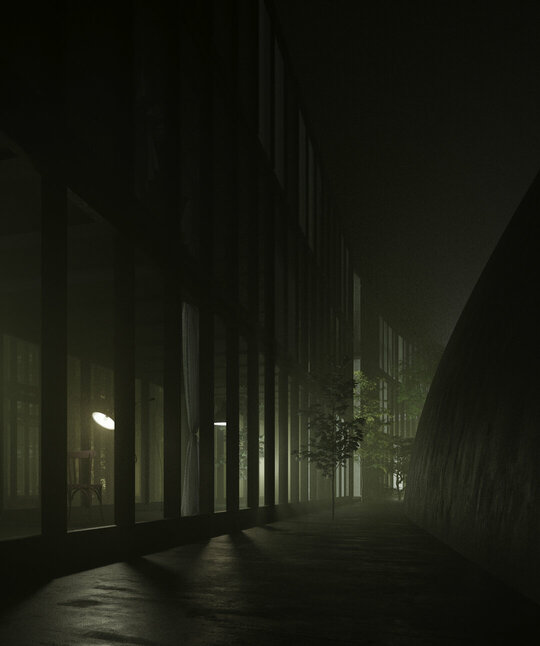 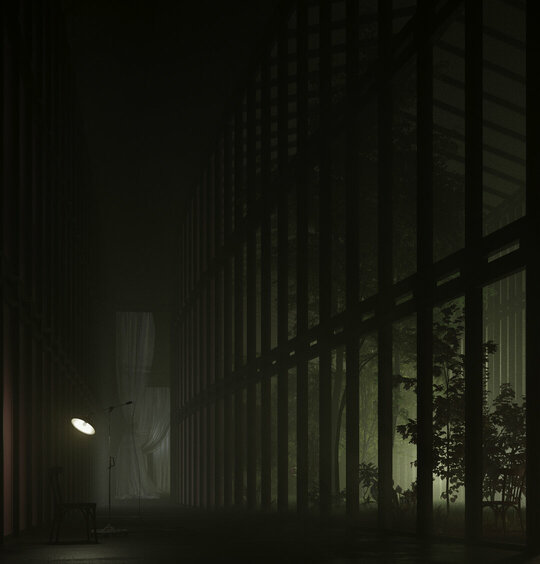 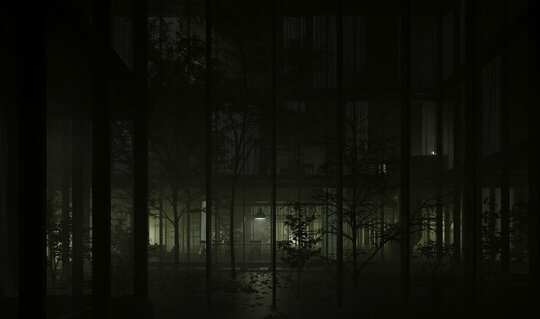 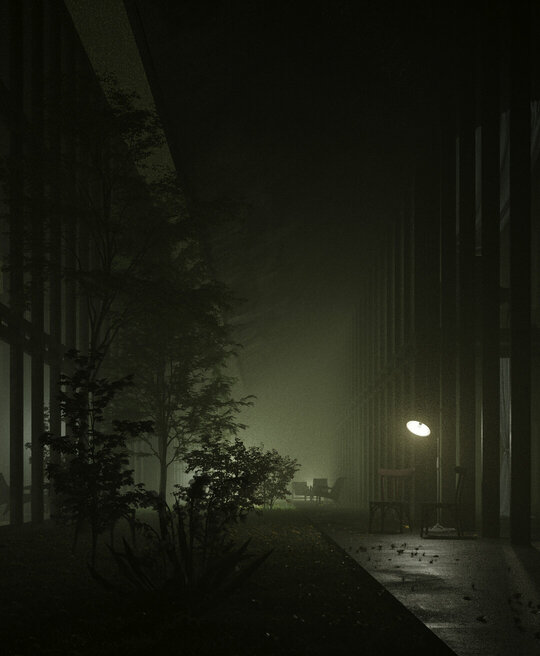 crevice on the main facade of Chartage

Bruno Andreșoiu: A poetic – historically referenced project, with a distinct personality. A speculative meditation upon history’s structures ability to reemerge, through contemporary interpretations, into actual cities. Probably the most challenging project in terms of rethinking urban life and possibilities, with a safe distance form current technological obsessions. Very well presented, maybe a bit too mysterious…, the project stands out from its competitors.

Arjan Dingsté: The project reflects in a poetic way how past structures redefine our current conception of our sometimes dystopian city environments.

In its 'build' shape reminiscent of the typological set-up Skolkovo University designed by Herzog & DeMeuron the proposal communicates a high density yet human scaled proposal with well proportioned urban (green) spaces versus the buildings with an intriguing diagonal access as a provocative connector.

Krzysztof Ingarden: The project, titled “Carthage”, is an interesting and original concept. The famous Phoenician city and port on the African coast of the Mediterranean sea was the long-time enemy of the Roman empire. "Carthage must be destroyed" - were the famous words repeated by Cato in the Roman senate. Finally after the series of Phoenician wars, the city was completely destroyed to ruins in the year 146 b.c., to become a Roman colony. Cardo and Decumanus - based layout was “imprinted” into the rebuilt city structure.

Whether the competition project's aim is not to destroy the 2031 City, but to cure it with the use of a free interpretation of the Roman urban concept of - is the matter of individual interpretation. In fact the proposed form of the new Carthage (here limited to a free improvisation of Roman camp layout) is being inserted with surgical precision into the plans of various cities in such a way that it does not cause disruption. It adds a set of interestingly composed functional cultural mix - from museums to cafeterias and housing. It is a cultural camp inserted into the existing city structure.

This project is done with knowledge of the history of urbanism and with evident architectural and artistic talent and poetical vision.

Dimitris Pergamalis: The human scale perspective and the mystery of the presentation is what makes the Carthage project unique. It’s the perfect combination between the past (an industrial zone refurbishment maybe) and a futuristic vision. The future doesn’t have to aim for the sky, but for the inner peace and comfort of the User. The transparency of the neighborhood and the curved paths convinced us to start exploring it.

Jakub Szczęsny: The proposal looks at Roman city as a common reference point for future European cities, yet it’s even more universal. It is also suggesting great versatility of adaptation as a form of “language” that could be used in different climatic zones, in different proportions, ratios between indoor and outdoor spaces and heights. Well presented and textually described it made a big impression with it’s mature and well-thought character.

Andrei Șerbescu: A beautiful and powerful statement about architecture, time and humankind. A strong reminder that, in a time of exponential technological expansion, there is always a deep knowledge in what precedes us: history has been and will remain our most important reference, even for a city belonging to the future. Far from all the other entries, Carthage is not just a proof of genuine talent, but also a complex and culturally rich answer to what an idea competition stands for.