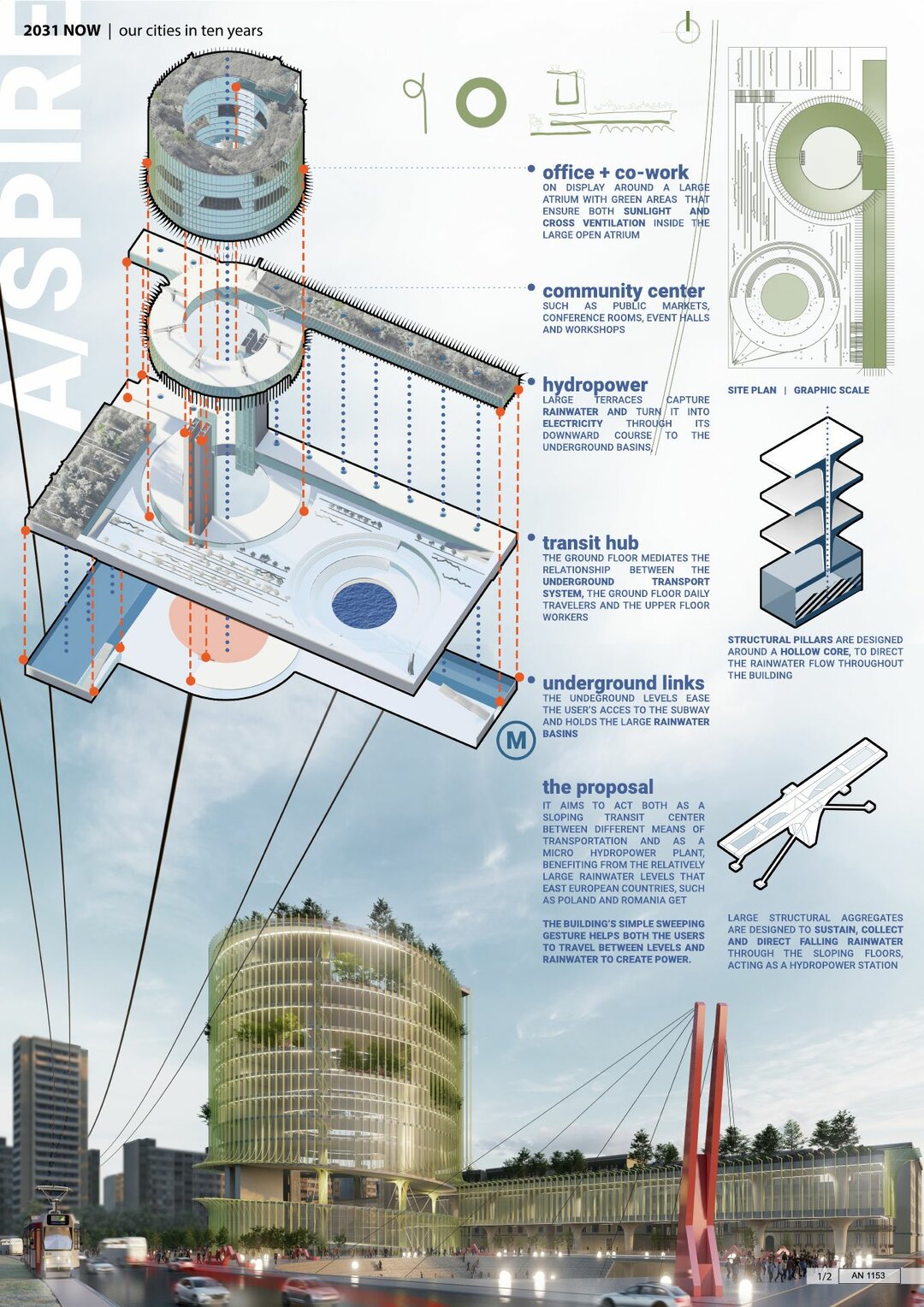 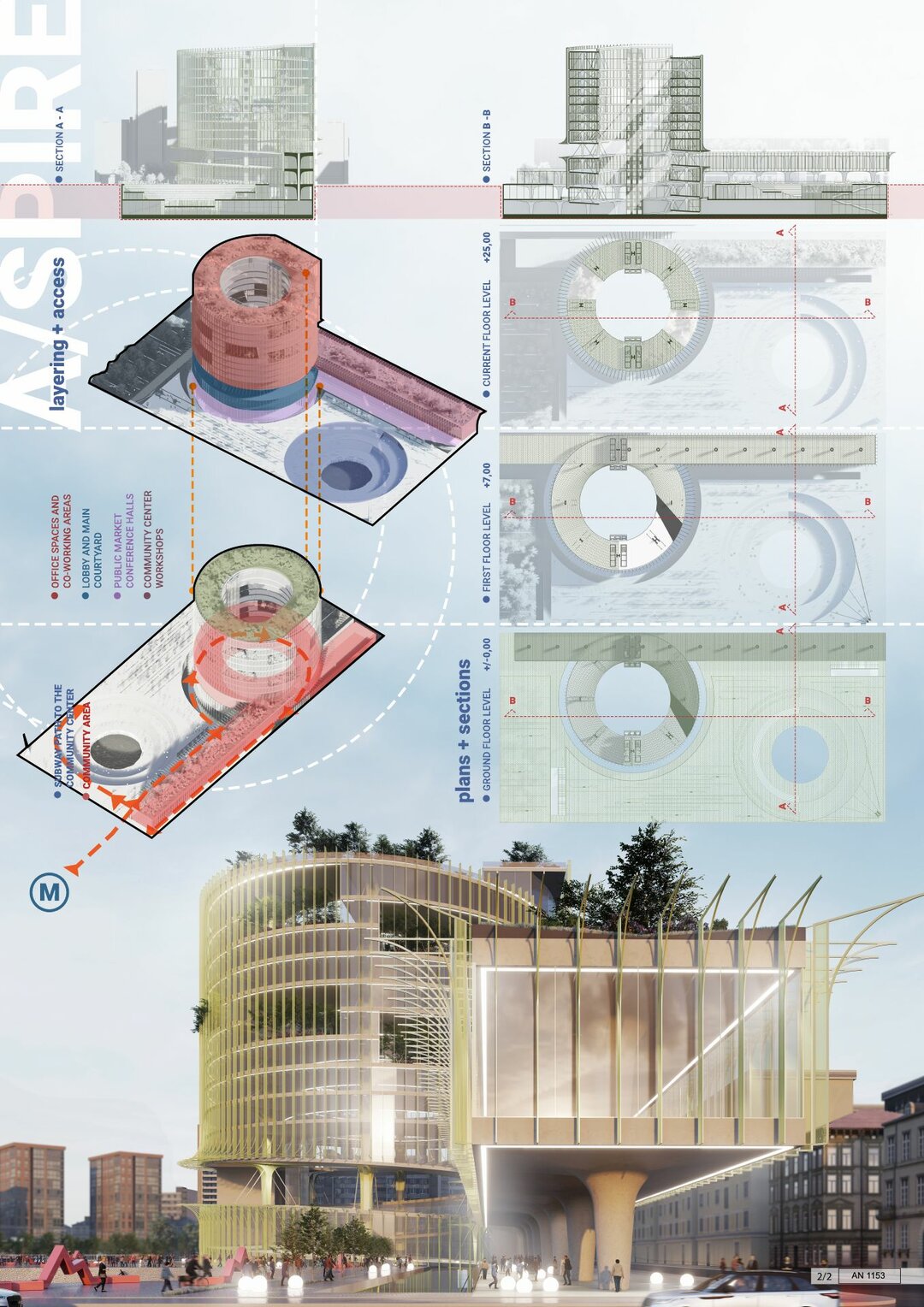 The proposal aims to act both as a sloping transit center between different means of transportation and as a micro-hydropower plant, benefiting from the relatively large rainwater levels that east european countries, such as Poland and Romania get.

The sweeping body of the building, developed on the lower levels (ground floor and underground floors), helps with transiting users from the link with the subway station to the ground level (where the light transportation means are located), and also to the upper levels where the office spaces are located.

To act as a self sustaining environment, the sweeping body of the building is also used to carry the collected rainwater from the upper levels terraces to the underground level, to large storing basins, to be reused. This process of carrying the water through the sloping surfaces of the building makes the concept act as a micro hydropower plant, creating energy from the waterflow.

The layering concept is designed to be of use to the community, therefore at the lowest levels we find a public market, conference halls, and also workshops inside a community center. Positioning it at these levels makes access easy from the transportation means. The upper levels are meant for office spaces and co-working spaces, therefore separating them from the community center, while keeping it linked through a sloping open floor.

The central atrium benefits from green breaks in its contour, that ensure enough sunlight throughout the day and cross ventilation. Also, being an office building the facades need shading in some hour intervals, therefore the design of the kinetic poles that are used both for shading and creating electric power through the wind movement.

A/SPIRE is a concept that can be integrated throughout european countries to create new, self sustaining models. 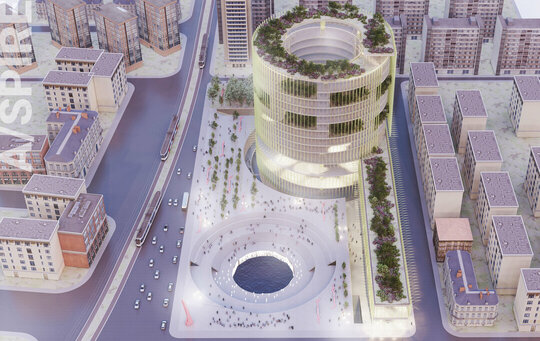 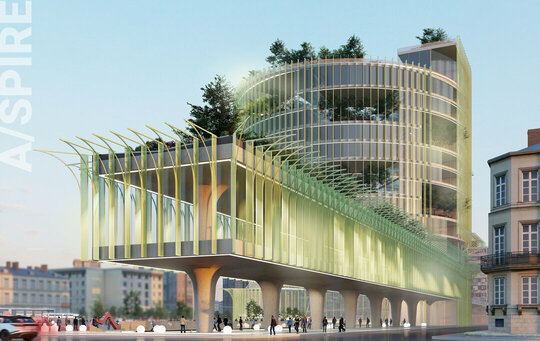 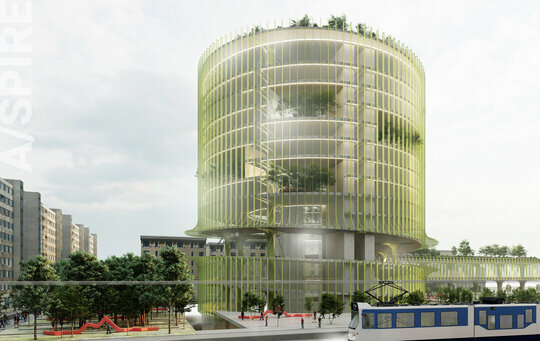 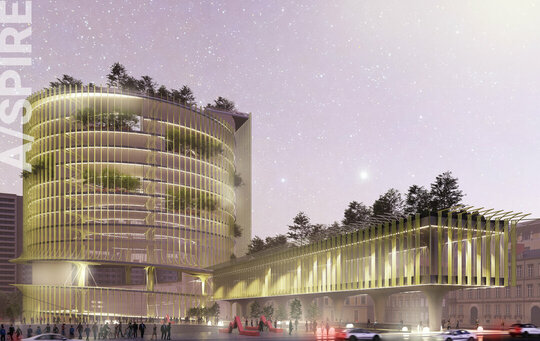 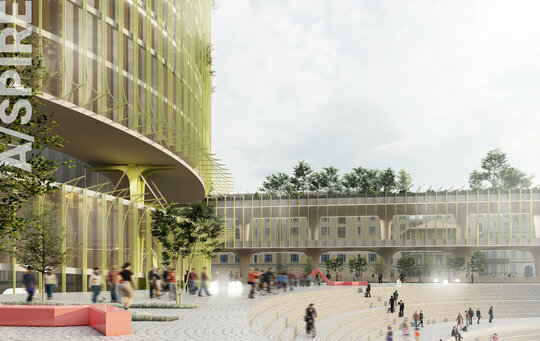 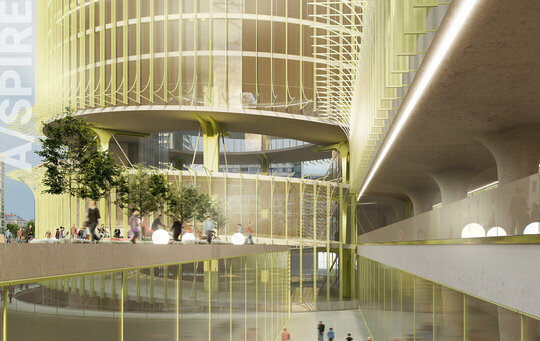 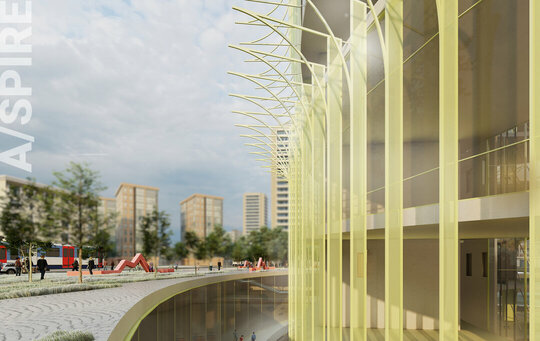 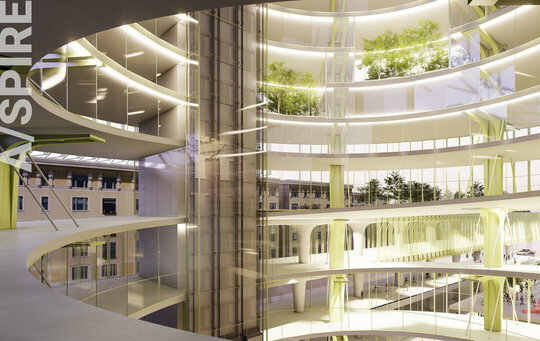 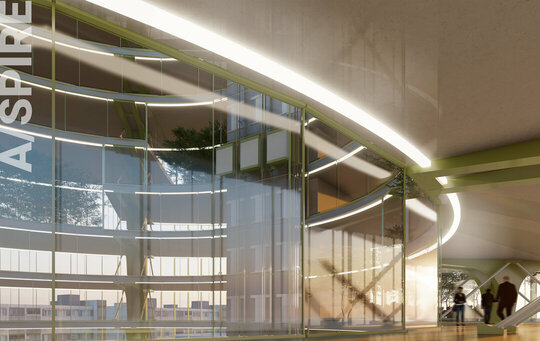 Bruno Andreșoiu: The proposal aims to tackle number of actual city concerns – density, (self)sustainability, connectivity and does it in a quite convincing way. Even if the technical approach is precarious, the ideas behind it are to be considered valuable. A better treatment of the public space in terms of human scale, intimacy and interactions would have given the project a stronger impact.

Arjan Dingsté: The project makes a bold, yet composition wise balanced statement. The architect(s) are dreaming of how they could make the built structure self-sustaining, which is a very important part of our current and future building needs. Technically the amount of rain water collected would realistically not be able generate any energy of significance for the use of the project.

It also could have been considered that the proposed square would be the biggest potential rainwater collector. Also this square with its stony character would negatively contribute to the urban heat island effect. The layered program layers are interesting as a concept but layer interconnectivity has not been developed strongly.

Krzysztof Ingarden: The project is a formally interesting attempt to propose a vertical organization of various mixed functions for living - working - resting, combined with an idea of rain water management and energy production. From the technical point of view, the analytical part does not provide a credible reasoning that the idea of producing energy is in this case feasible. Nevertheless the visual and compositional proposal is quite an interesting attempt and strong gesture that shows a potencial. The problems addressed in the project - how to design inspiring spaces in multi functional and zero energy buildings, are in fact the ones architects face in their everyday practice.

Dimitris Pergamalis: Clearly the most complex and functional project from the competition, A Spire can be immediately applied into reality. It includes all the details and links them beautifully together in a graphic presentation. High, but not aggressive, it opens to the public in a natural way that makes it blend in almost any context.

Jakub Szczęsny: The project is a proposal of an urban plot turned into a “green machine” that continuously uses and reuses the resources of the very plot in order to provide water and energy to the very same place and it’s users. The thought is very tempting: can we create concentrated tools of sustainable everydayness without creating expanded, ever more developing and far-reaching infrastructures? Even though I wasn’t quite convinced with the realism of the proposal I was attracted by the concept of “let’s have it all here” because it leads to a question about the possibility of creating cities as archipelagos of off-grid islands. But aren’t our cities exactly the opposite: aren’t they grids of all kinds, from infrastructural to psychological?

Andrei Șerbescu: A project which looks at sustainability as a way of transforming architecture, becoming a reason for dealing differently with the buildings’ shapes, volumes, spaces and inner structure, therefore surpassing the quite common understanding of sustainability as nothing more but technological devices applied upon buildings. An attempt to imagine buildings (city’s occupied spaces) and squares (city’s unoccupied spaces) as artifacts and places which could possibly become more than what they are typically used for, in a somehow inertial manner.