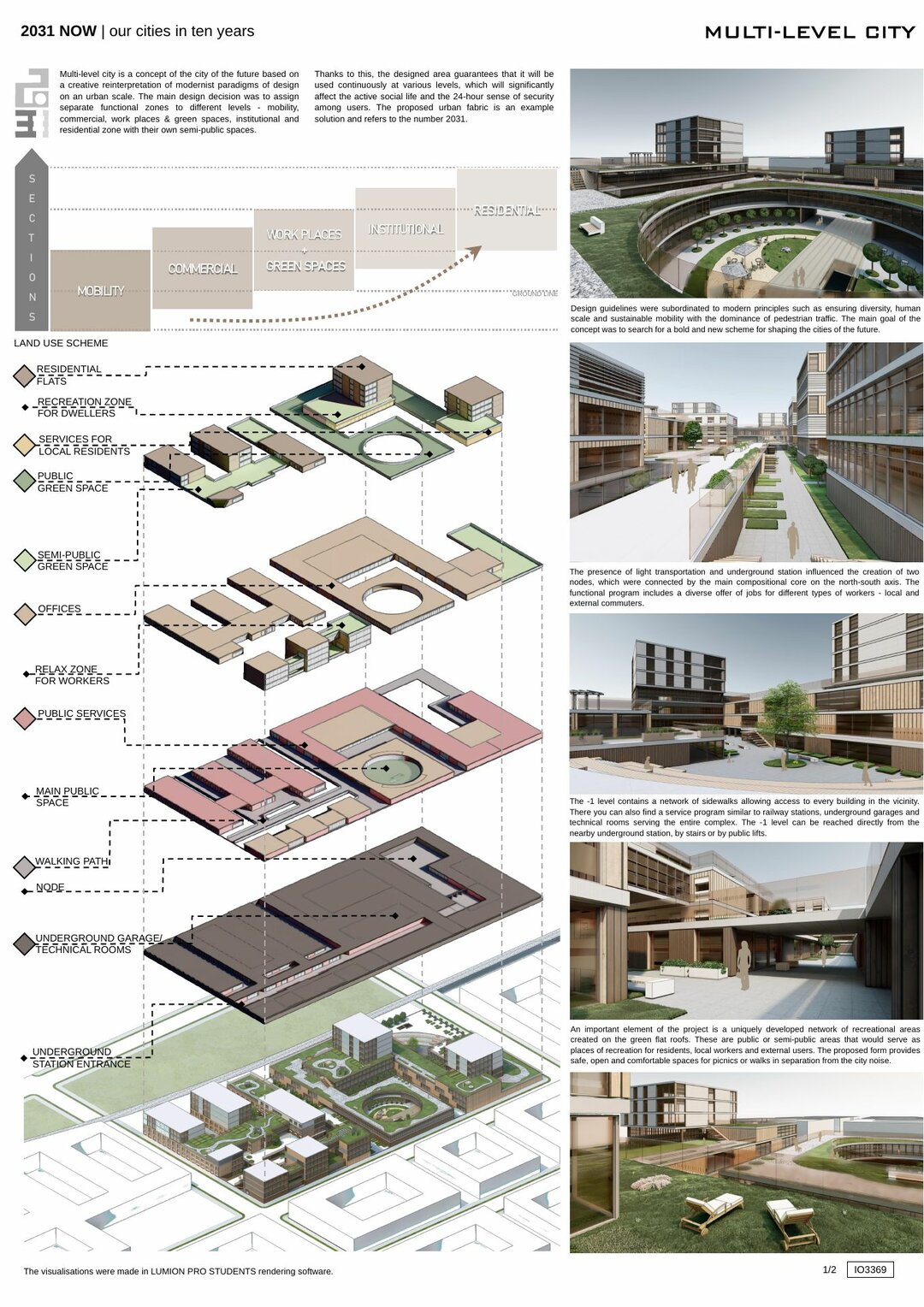 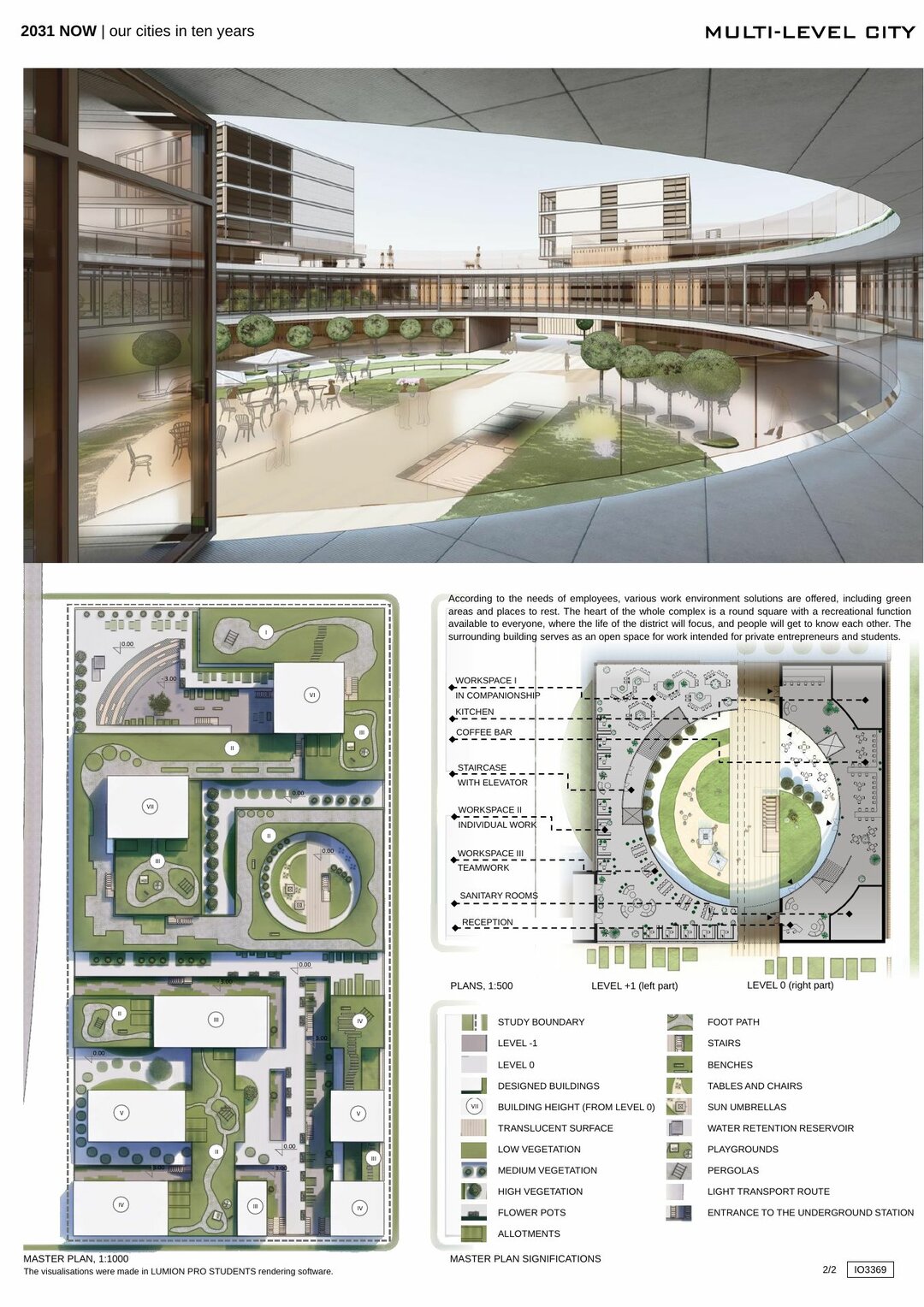 Multi-level city is a concept of the city of the future based on a creative reinterpretation of modernist paradigms of design on an urban scale. The main design decision was to assign separate functional zones to different levels - mobility, commercial, work places & green spaces, institutional and residential zone with their own semi-public spaces. Thanks to this, the designed area guarantees that it will be used continuously at various levels, which will significantly affect the active social life and the 24-hour sense of security among users. The proposed urban fabric is an example solution and refers to the number 2031.

Design guidelines were subordinated to modern principles such as ensuring diversity, human scale and sustainable mobility with the dominance of pedestrian traffic. The main goal of the concept was to search for a bold and new scheme for shaping the cities of the future.

The presence of light transportation and underground station influenced the creation of two nodes, which were connected by the main compositional core on the north-south axis. The functional program includes a diverse offer of jobs for different types of workers - local and external commuters.

The -1 level contains a network of sidewalks allowing access to every building in the vicinity. There you can also find a service program similar to railway stations, underground garages and technical rooms serving the entire complex. The -1 level can be reached directly from the nearby underground station, by stairs or by public lifts.

An important element of the project is a uniquely developed network of recreational areas created on the green flat roofs. These are public or semi-public areas that would serve as places of recreation for residents, local workers and external users. The proposed form provides safe, open and comfortable spaces for picnics or walks in separation from the city noise.

According to the needs of employees, various work environment solutions are offered, including green areas and places to rest. The heart of the whole complex is a round square with a recreational function available to everyone, where the life of the district will focus, and people will get to know each other. The surrounding building serves as an open space for work intended for private entrepreneurs and students. 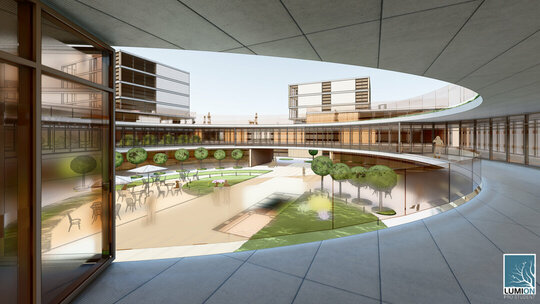 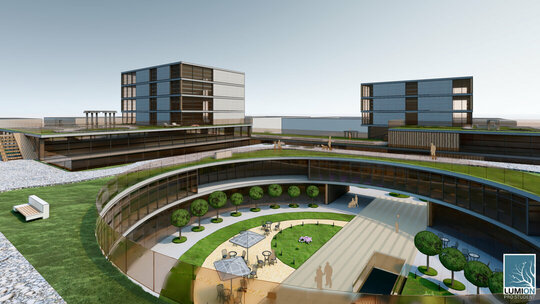 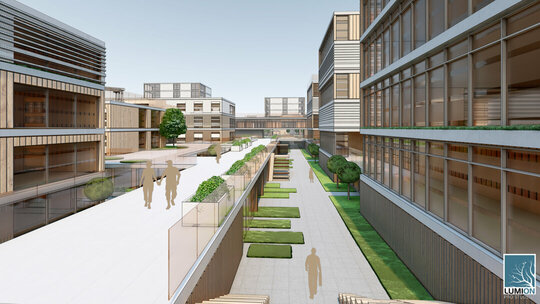 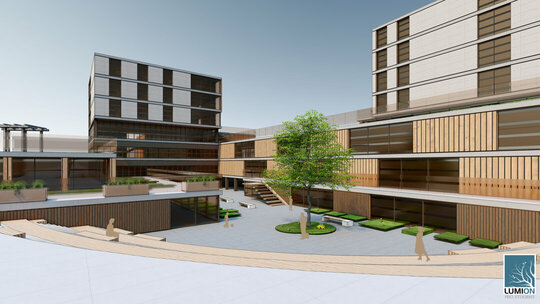 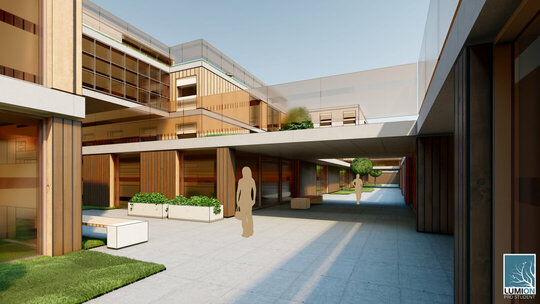 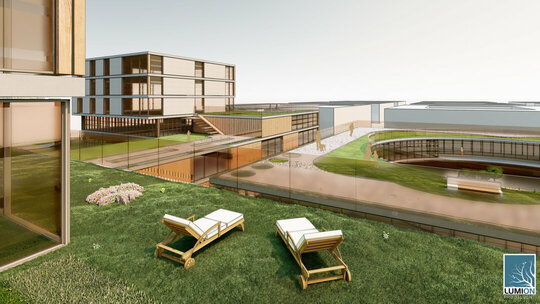 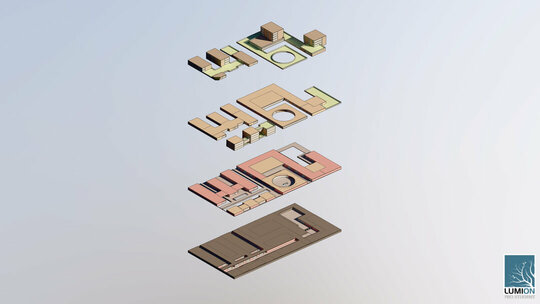 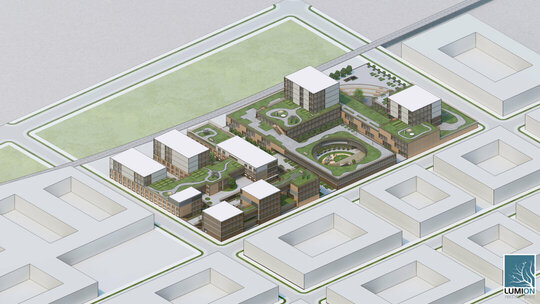 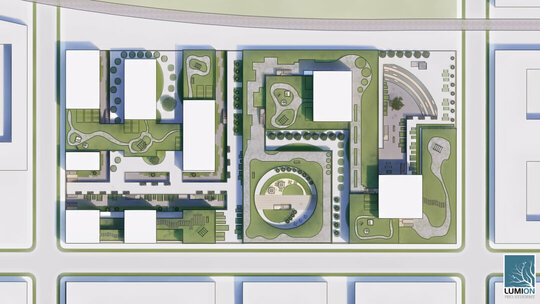 Bruno Andreșoiu: The project aims to offer a lot of public spaces and a vertical segregation of functionalities, that are generous, although common, ideas. The urban fabric is to be seen as a branding proposal, with the inevitable compromises and a certain lack of coherence, but not without qualities. The modernist references are not so clear, as the whole explanation of the project, that otherwise has real urban space qualities.

Arjan Dingsté: Although the project text addresses the right themes, the verbal explanation doesn't communicate a clear vision, as such the project reads quite generic.

The layered programming is an interesting theme however the project does not explain/communicate how synergies between these layers are achieved and how they spatially communicate to each other.

From a master planning perspective the 'backbone' is not clearly readable and volumes, although balanced in composition, the project seems to be developed in separate parts.

Krzysztof Ingarden: The proposal aims at creating vertical functional sandwiches - from parkings below and then public services, offices and housing and recreation spaces above. However the project does not explain its theoretical assumptions - why and to what extent it is the "reinterpretation of the modernist paradigm" (i.e functional zoning and separation of traffic). We can see an attempt to enrich modernist legacy with vertical piling up of the functional zones one over another, but cannot be convinced that it works properly and that it would be a good solution for the future cities. We can guess that it is a proposal to introduce functional diversity and spatial complexity as a cure to the historical CIAM urbanism failures, but the project text is not directly providing this kind of interpretation.

Dimitris Pergamalis: Functionally layering the city of the future is an interesting idea, but also a very probable possibility. The modern direction of the design is obvious; it gives comfort by its human scale and it’s biophilic design. Multi Level City brings in a functional scheme that can be easily applied; its detailed planning is clearly a plus. And, in the end, who wouldn’t want to work in an office building that opens up to a wide inside garden?

Jakub Szczęsny: The project is good looking. There’s human scale, a well-proportioned square, a couple of layers of different functions nicely packed in a generic form of a decent building we might see in any city, not only in Europe. Unfortunately not much synergy comes out from the very layering and nothing really original in terms of bringing new thoughts in the future of the European built environment.

Andrei Șerbescu: Building upon previous architectural experiments, Multilevel works with the interesting idea of a city’s vertical layering. While there is a high potential in such an idea, and even though the design creates attractive, desirable spaces, the project lacks a genuine exploration of a vertical city paradigm, as it presents a compound which could very well be some of today’s so-called “mixed use” architecture.