The city of green bridges 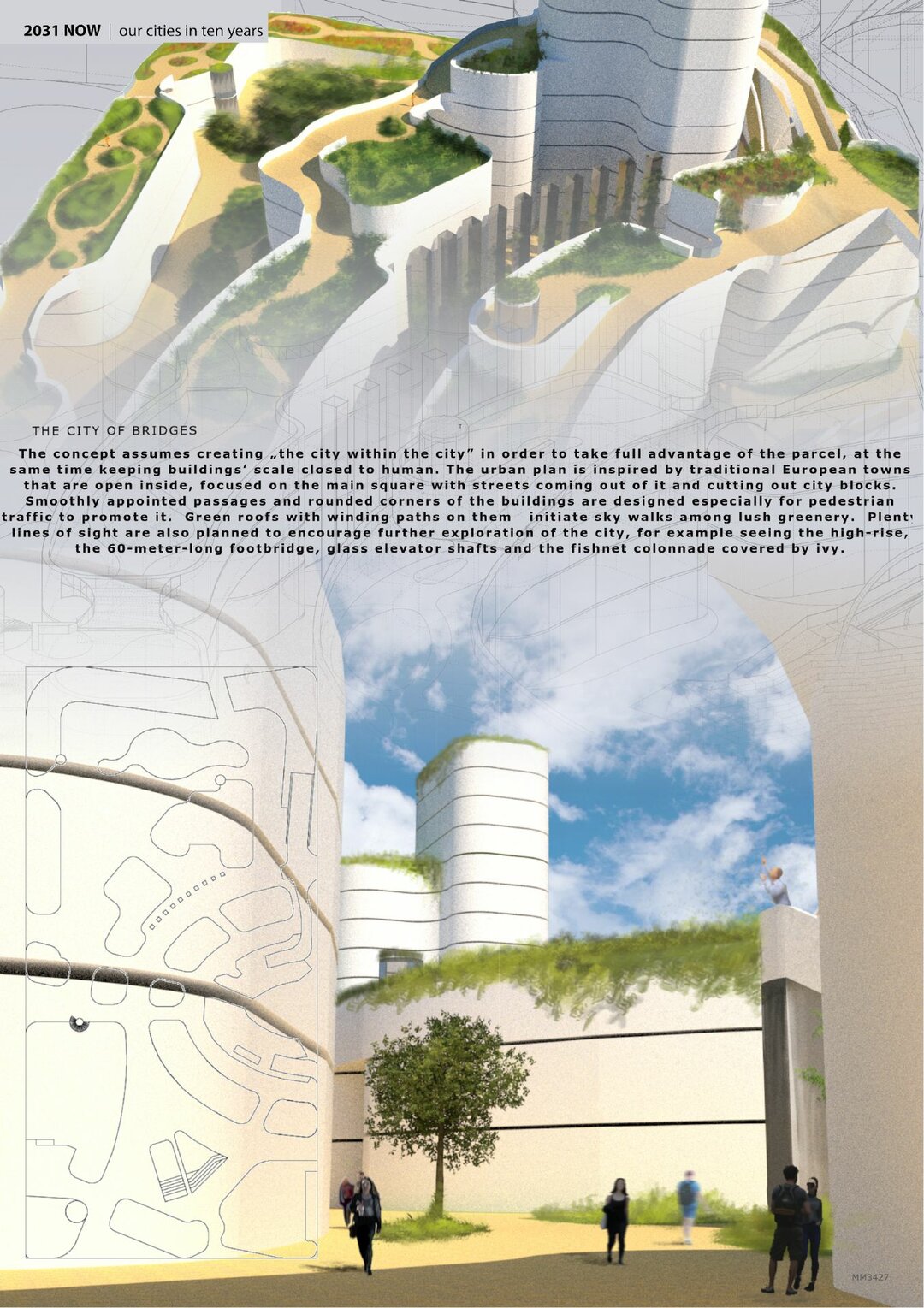 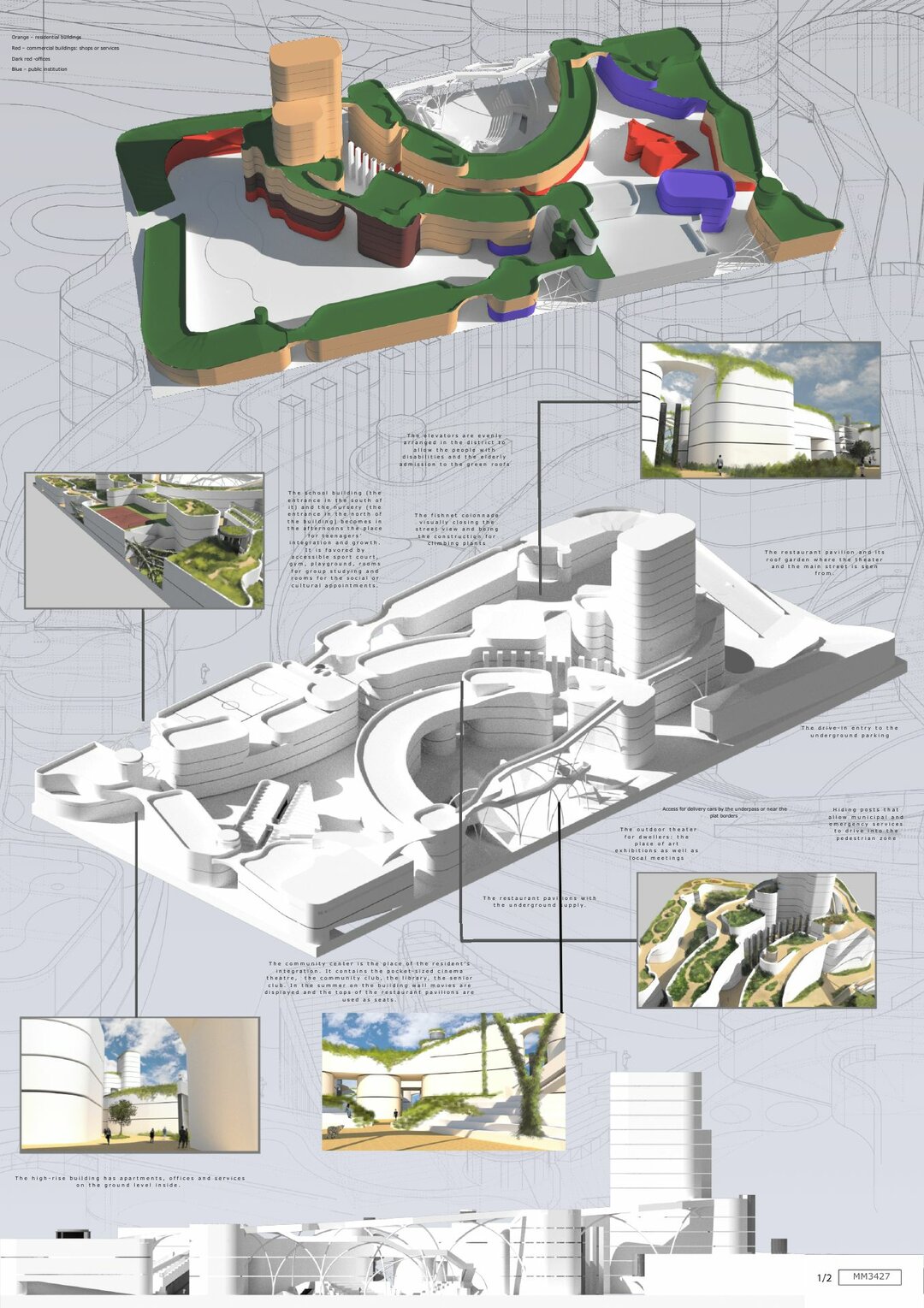 The concept assumes creating „the city within the city” in order to take full advantage of the parcel, at the same time keeping buildings’ scale closed to human. The urban plan is inspired by traditional European towns that are open inside, focused on the main square with streets coming out of it and cutting out city blocks. Smoothly appointed passages and rounded corners of the buildings are designed especially for pedestrian traffic to promote it. Green roofs with winding paths on them initiate sky walks among lush greenery. Plenty lines of sight are also planned to encourage further exploration of the city, for example seeing the high-rise, the 60-meter-long footbridge, glass elevator shafts and the fishnet colonnade covered by ivy.

2 The drive-in entry to the underground parking

4 The school building (the entrance in the south of it) and the nursery (the entrance in the north of the building) becomes in the afternoons the place for teenagers’ integration and growth. It is favored by accessible sport court, gym, playground, rooms for group studying and rooms for the social or cultural appointments.

5 The community center is the place of the resident’s integration. It contains the pocket-sized cinema theatre, the community club, the library, the senior club. In the summer on the building wall movies are displayed and the tops of the restaurant pavilions are used as seats.

6 The high-rise building has apartments, offices and services on the ground level inside.

7 The restaurant pavilions with the underground supply.

8 The restaurant pavilion and its roof garden where the theater and the main street is seen from.

11 The outdoor theater for dwellers: the place of art exhibitions as well as local meetings 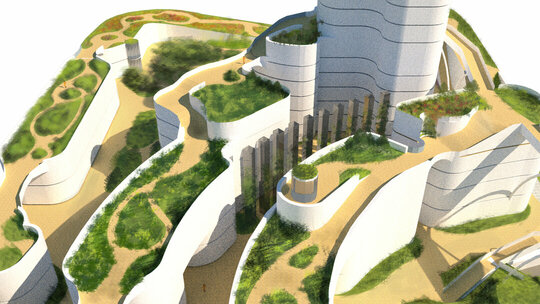 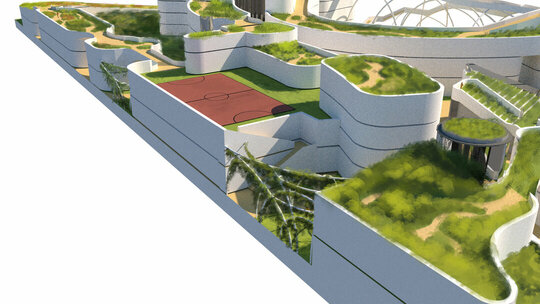 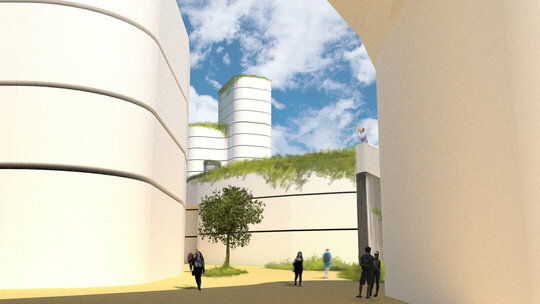 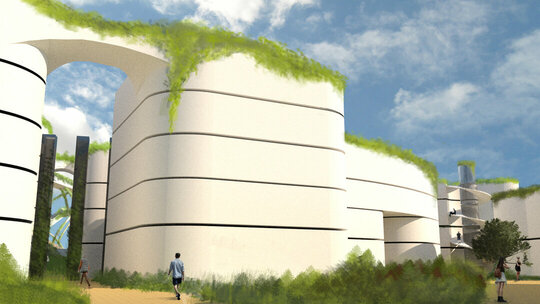 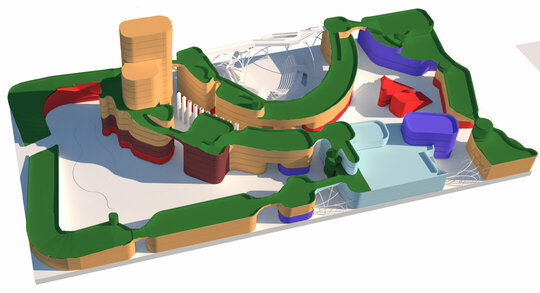 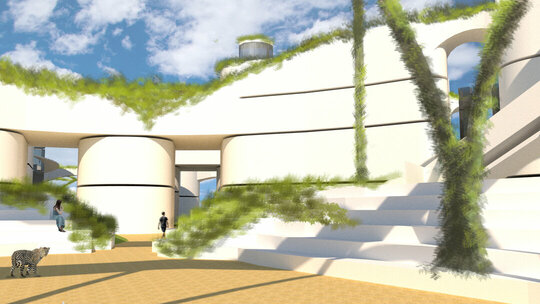 Bruno Andreșoiu: The project makes reasonably good use of the idea of mixing functions and using urban terraces for pedestrian paths and green spaces, a true opportunity for the future urban environment. But it does so by proposing a complicated urban fabric, with quite unpleasant urban spaces – too open on the top of the buildings and too large or too narrow on the ground level. A smarter use of spaces between the buildings and on the green terraces, as well as a more convincing quality of the presentation would have given a greater value to the project

In it's typology and formal set-up it seems to create an urban version of Kieslers 'Endless house'. More explanation of the programmatic distribution would have been interesting to be demonstrated.

Krzysztof Ingarden: The project addresses the serious environmental problem of highly populated and densely built cities and provides one of its possible solutions - big scale urban greening on building roofs, connected to one another to form bridges as alternative pedestrian routes as well as recreation areas. Rooftop gardens definitely have a positive impact on the city environment, however they will not solve the urban problems of a 2031 City. The project’ presentation quality could be more convincing.

Dimitris Pergamalis: The City of green bridges is just a sketch, a vision, it didn’t get the change to get into details, but it creates the opportunity to imagine how it can be developed further. The resulted spaces and paths welcome the user to explore. The environment is familiar, but also oriented towards a near future.

Jakub Szczęsny: Although I was not convinced by the quality of renderings and overall aesthetics of this project, I apreciated a vision of fluid spaces with forms that, if further developed, could provide rich environment to live in with an interesting ratio between the height of layered, organic structures and fluid spaces in-between.

Andrei Șerbescu: A city within a city could be tempting research for the competition’s design brief: the autonomous urban island, bringing together the poles of urban life and connecting them in such a manner as to allow for a smaller scale community and urbanity. But the design is not convincing, as it remains concerned mostly with building shapes, creating weird juxtapositions. The route connecting only green roofs, as desirable as it can be, is difficult to imagine as a total replacement for the “old fashioned” ground walks.