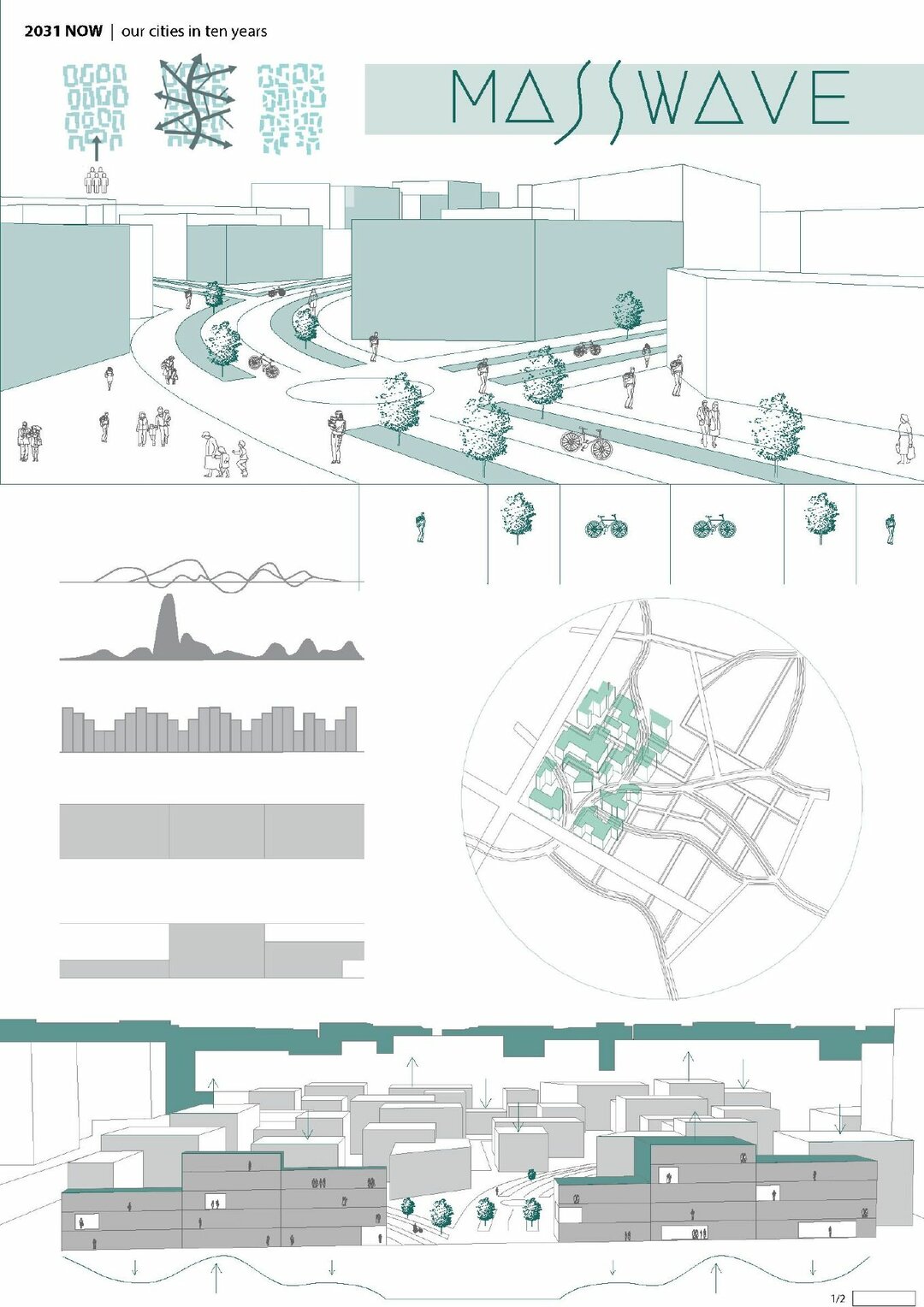 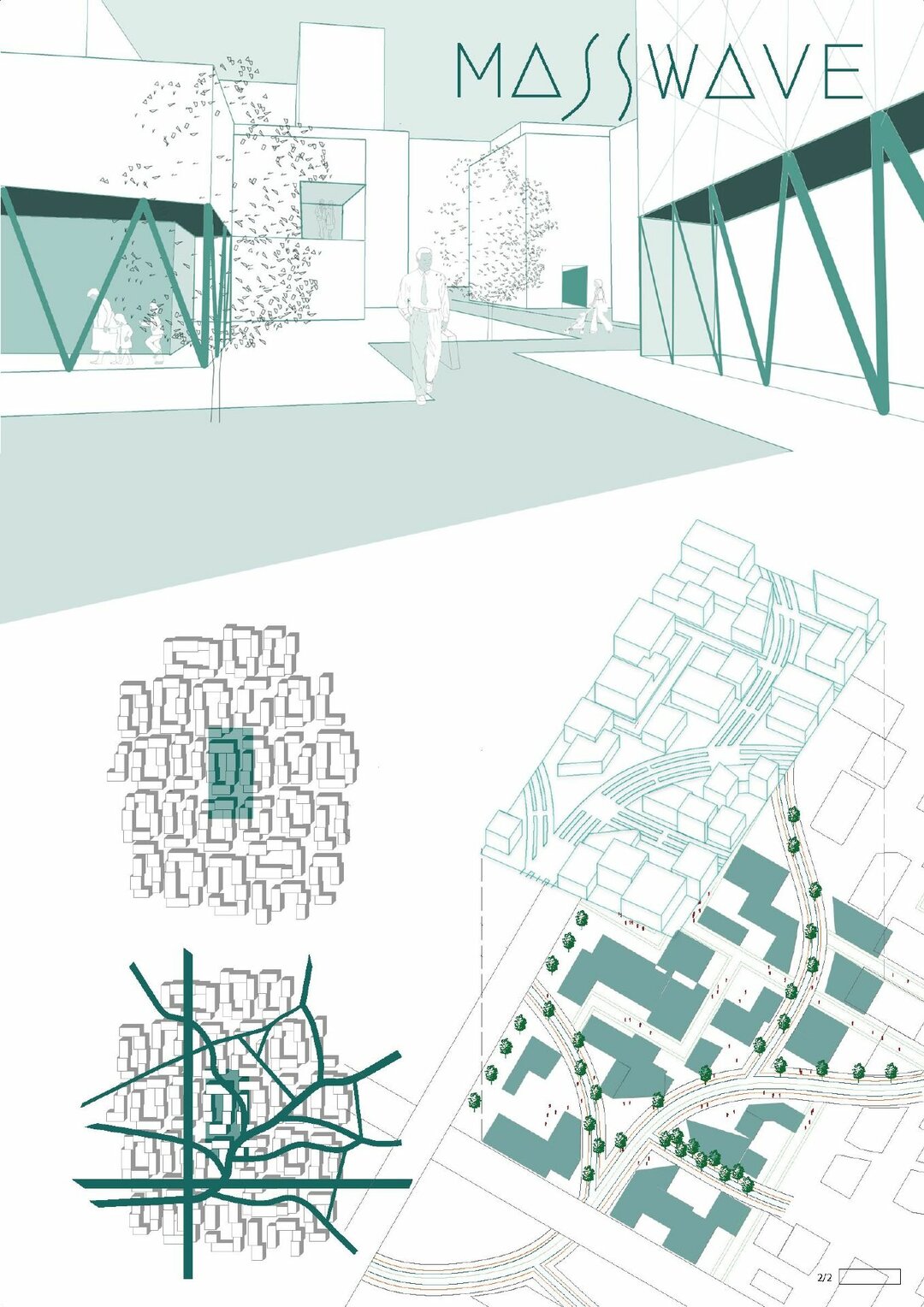 We imagined a city shaped by the movement of people. As an experiment we let a wave of pedestrians into traditional European urban structure and allow them to create their own paths based on their innate needs and wants. Using those roets we disrupted and modified existing grid drawing inspiration from organic forms of rivers and water.

Our city of the future is most importantly multifunctional and non centralized. By scattering functions we persuade the concept of 15-Minute City and allow all the residents to fulfill necessities with a walking distance.

Pandemic reality made us reconsider how we think about bigger groups of people. To avoid unnecessary crowds we propose a branched street plan, introduce breathable motion with lots of greenery into the city.

To prioritize citizens, we close the site from car traffic and make it more friendly for pedestrians and bikers. We implemented the human scale high of building between 9-15 m and also set up open ground floors inspired by the experience of wandering around Italian streets which makes city more invinting.

Our project is just a scheme of a small part of the city and is meant to be seen as a formula to replicate while designing future master plans. We don't impose any function to make it more versatile and easy to adapt to constant changes in time and society. Cities are in constant processes of adjustment to the world around them with their residents and we want our concept to be able to transform with them.

We wanted to show that the city, just like people and water in nature, should be fluid. It should symbiotically circulate and develop with us adapting to our innate needs. 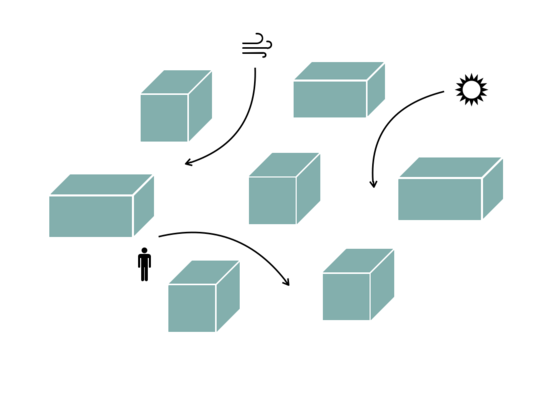 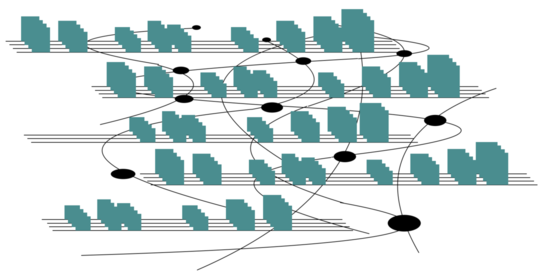 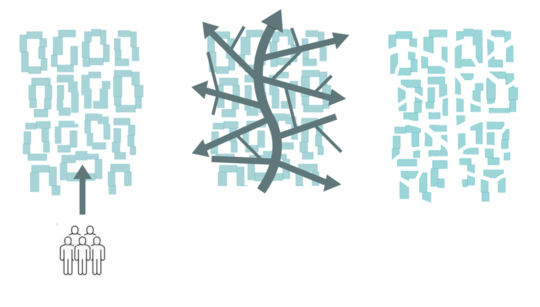 Arjan Dingsté: The project addresses the contemporary theme of the walkable 15 minute city, however does not address what this would mean in programmatic layering our positioning. In its basic set-up it reminds of a Kasbah-like set-up of interconnected urban spaces. It would have been interesting if the concept would have been deeper explored.

Dimitris Pergamalis: Transition as the project theme - a deeper study can surely bring out some interesting ideas. People flowing through like water - a biophilic theme that could be envisioned further in a similar manner. Unfortunately it is just the starting point and not a complete concept.

Andrei Șerbescu: This is a very “democratic” view upon what a city could look like. We can accept to leave all problems out and enhance whatever one considers to be the most desirable features: pedestrian-only territories, versatility, low-rise buildings, organic structure induced by people’s movement etc. But urban quality has for a long time proved to be about much more than movement, directions, and forms. The entry still needs to define a more specific form of answer, as it stays quite vague, and it seems to be just the beginning of exploring an idea.