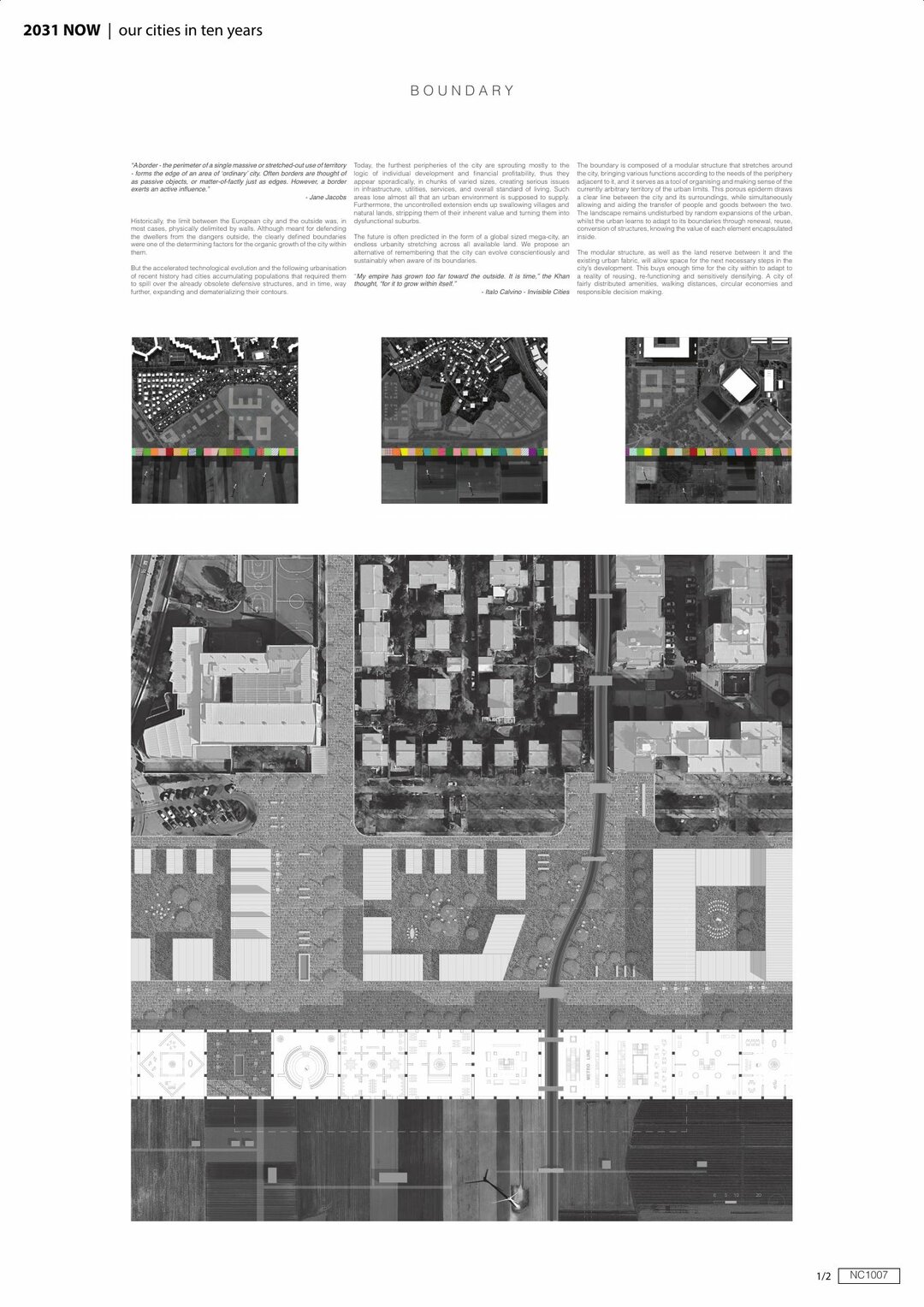 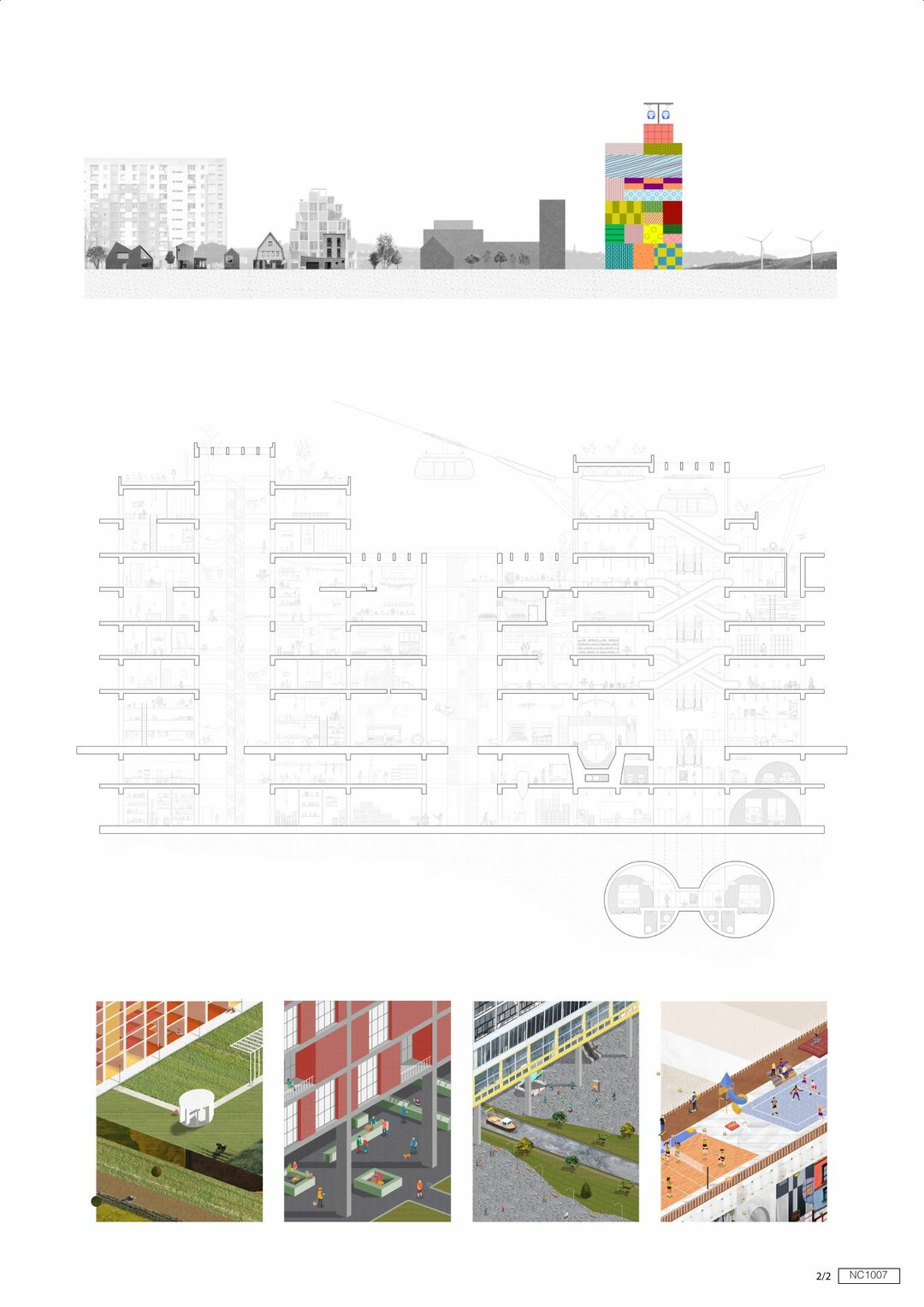 “A border - the perimeter of a single massive or stretched-out use of territory - forms the edge of an area of 'ordinary' city. Often borders are thought of as passive objects, or matter-of-factly just as edges. However, a border exerts an active influence.”

Historically, the limit between the European city and the outside was, in most cases, physically delimited by walls. Although meant for defending the dwellers from the dangers outside, the clearly defined boundaries were one of the determining factors for the organic growth of the city within them.

But the accelerated technological evolution and the following urbanisation of recent history had cities accumulating populations that required them to spill over the already obsolete defensive structures, and in time, way further, expanding and dematerializing their contours.

Today, the furthest peripheries of the city are sprouting mostly to the logic of individual development and financial profitability, thus they appear sporadically, in chunks of varied sizes, creating serious issues in infrastructure, utilities, services, and overall standard of living. Such areas lose almost all that an urban environment is supposed to supply. Furthermore, the uncontrolled extension ends up swallowing villages and natural lands, stripping them of their inherent value and turning them into dysfunctional suburbs.

The future is often predicted in the form of a global sized mega-city, an endless urbanity stretching across all available land. We propose an alternative of remembering that the city can evolve conscientiously and sustainably when aware of its boundaries.

"My empire has grown too far toward the outside. It is time," the Khan thought, "for it to grow within itself."

The boundary is composed of a modular structure that stretches around the city, bringing various functions according to the needs of the periphery adjacent to it, and it serves as a tool of organising and making sense of the currently arbitrary territory of the urban limits.

This porous epiderm draws a clear line between the city and its surroundings, while simultaneously allowing and aiding the transfer of people and goods between the two. The landscape remains undisturbed by random expansions of the urban, whilst the urban learns to adapt to its boundaries through renewal, reuse, conversion of structures, knowing the value of each element encapsulated inside.

The modular structure, as well as the land reserve between it and the existing urban fabric, will allow space for the next necessary steps in the city’s development. This buys enough time for the city within to adapt to a reality of reusing, re-functioning and sensitively densifying. A city of fairly distributed amenities, walking distances, circular economies and responsible decision making. 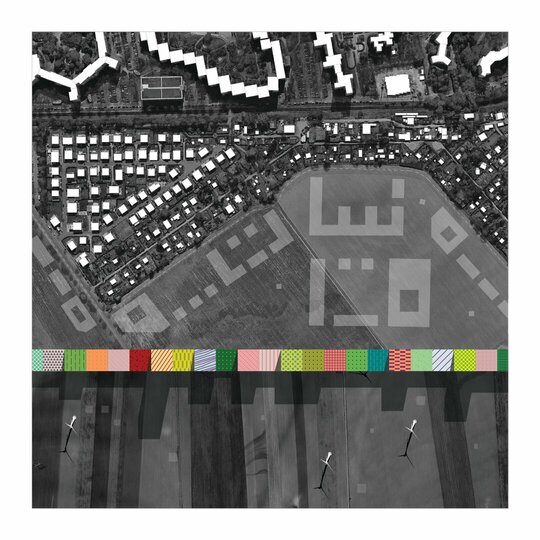 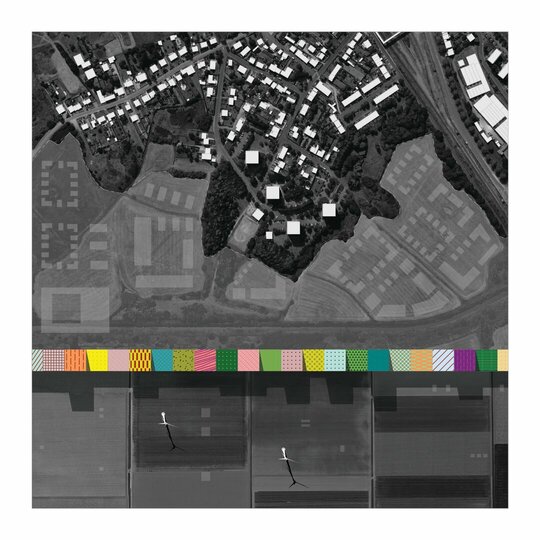 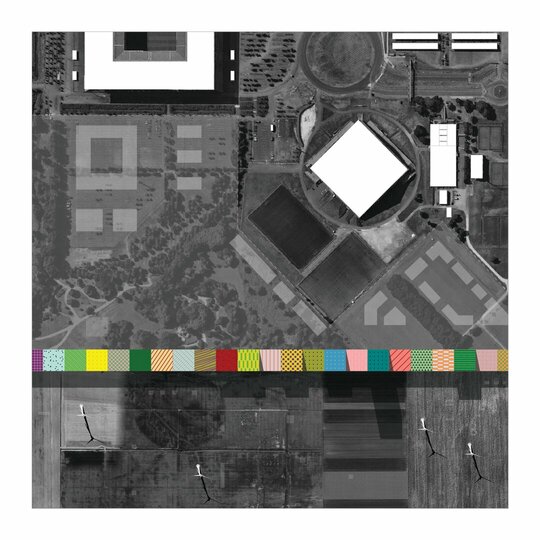 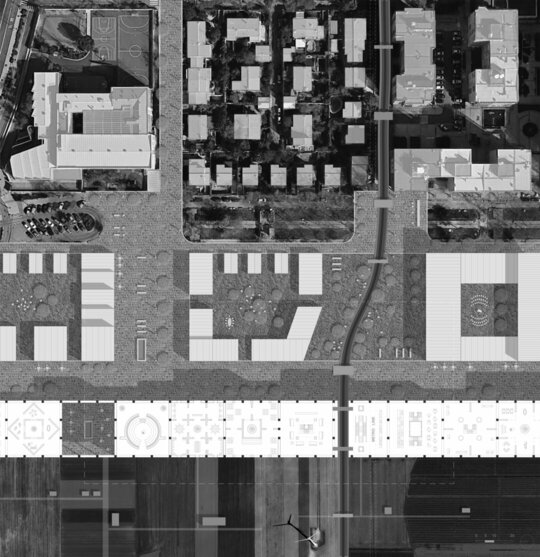 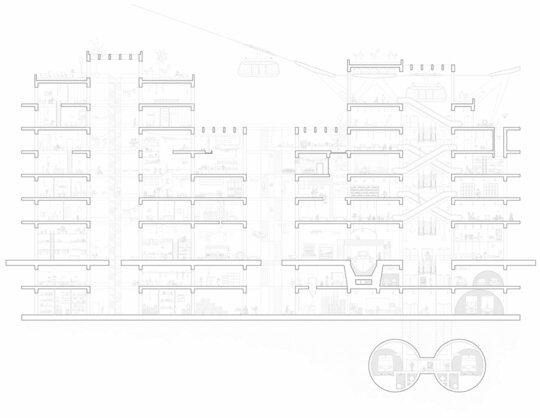 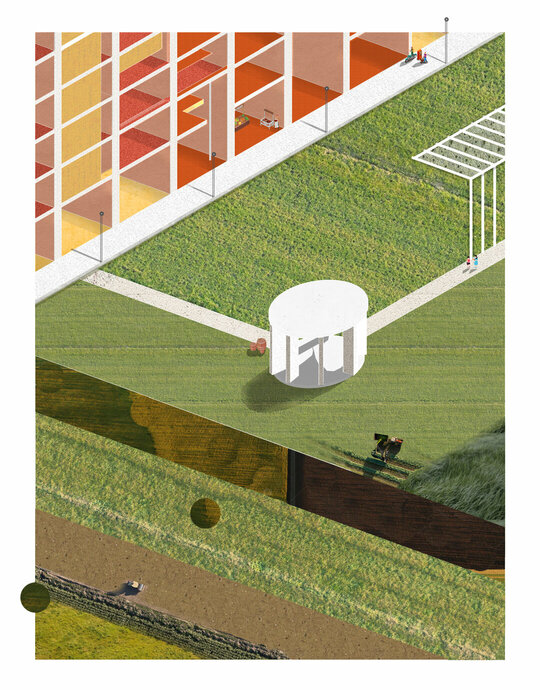 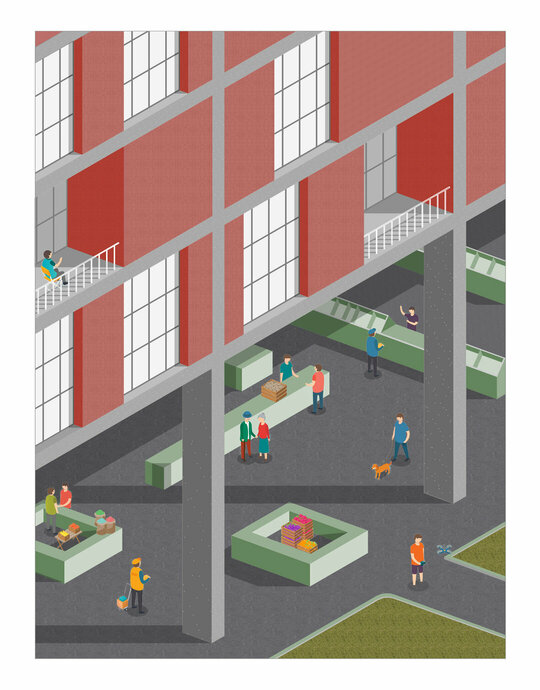 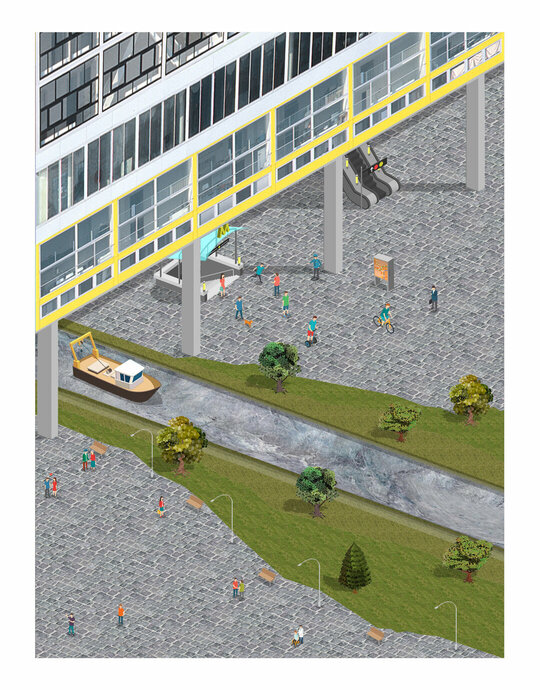 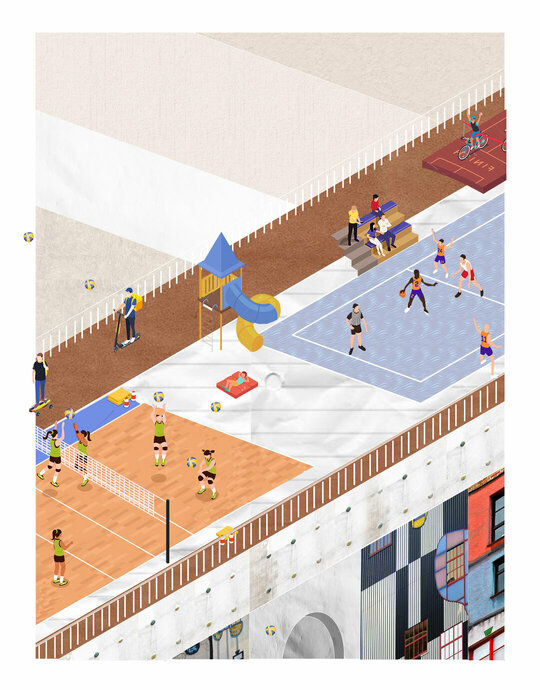 Bruno Andreșoiu: The project addresses a very interesting and actual theme for urban development and, more widely, society and people. In our days, boundaries (limits) seem to be having a strong comeback into the wide cultural (economic, philosophical, psychology etc) debate. Sadly, the project chooses to address and illustrate it in an excessive formal manner, that eludes more widely creative approaches. Unfortunately, it also deviates massively from the competition rules and should not be taken into consideration.

Arjan Dingsté: The project reads as a reinterpretation of Rem Koolhaas, Elia Zenghelis, Madelon Vriesendorp, Zoe Zenghelis project called ‘Exodus, or the Voluntary Prisoners of Architecture: The Strip’; which proposed a walled strip stretched through out London. However this time in a more 'happy eclectic' representation. Separate from that the proposal is deviating from the competition's proposed plot of land, It's unclear how such a strip/boundary would interact in our future cities to come. With the sincere question if putting a wall around our cities would not just be a temporary boundary around our ever expanding cities.

Krzysztof Ingarden: The project proposes a typologically interesting concept of housing as well as a linear module of urban structure. This type of project may refer to many original sources - linear concepts of housing have a long history (also in Poland for example - Oskar Hansen 's Linear Continuous System (LSC) realized in the 60-ties in Lublin, just to mention one of them. This competition proposal is a nice artistic gesture, but lacks proper justification in the context of future cities, as well as the competition objective - it does not comply within the competition rules.

Dimitris Pergamalis: The idea of transforming the historical city wall into an urban connection line is clearly original and interesting, but unfortunately it doesn’t respect the given competition theme.

Jakub Szczęsny: Although I’ve found the proposal to laconic, limited in expression and lacking in information, it’s core thought made me think about my own need for precise boundaries. Living in an ongoing process of untamable urban sprawl of Polish cities one would like to find a way of clearly setting a boundary between the “polis” and the land. The proposal is unclear, submitted to a degree of dominating and manieristic ortogonality that made me think of Giorgio Grassi and post-rationalistic monumentality and how poorly this formal language can adapt to lively nature of European cities. Apart of all it’s flaws the project addressed what I find an important motivation of the organizers of 2031NOW competition: the one to provide impulses for new reflection on our cities.

Andrei Șerbescu: A conceptual essay upon the city’s limits which could regain their lost capacity of protecting the city. Only that this time, in opposition to their historical purpose of defending the city from the outside assaulters, the new boundary would rather protect the city from within, as a shield against its own irrational, uncontrolled sprawl.